Yesterday, I spent the day cooking with my mom and I’ve got a few posts to share over the next weeks with what we made.  First up, our lunch – Smoky Red Lentil Soup – a great soup to add to your cold month lineup!  This is a recipe from Sara Forte’s new cookbook, The Sprouted Kitchen: A Tastier Take on Whole Foods.  With several of my favorite recipes from her blog, her cookbook is likewise full of recipes that are easy to make, and feature fresh, wholesome ingredients.  At the outset, the ingredients you may not have in your house are Red Lentils (picked those up from Whole Foods), Smoked Paprika (also labeled Pimenton), and liquid smoke.  I used most of the Red Lentils – and from My Father’s Daughter, I learned that Smoked Paprika can be used to add a similar flavoring to recipes, as does bacon – a good trick for us Kosher or non-bacon eaters.  The liquid smoke is optional in the recipe, but I was curious how it would add to the recipe (I might omit on my next batch and compare flavors then.)  The verdict?  The soup was quite comforting and savory, but I felt a little bland; however, my mom loved the flavors and how with all the different ingredients, no one ingredient was overpowering.  The soup took barely any time to make – and could definitely be a great weeknight meal, leaving some hearty leftovers for lunch or a light dinner later in the week. 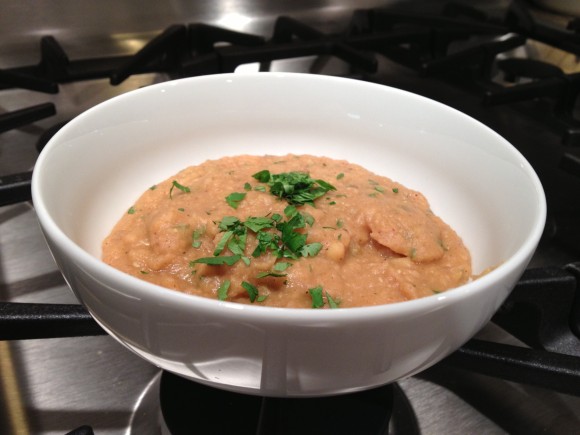