Last night Scott wanted me to make him brownies, because along with an ice cream sundae, he could always go for some brownies.  As we were glued to the TV, watching coverage of Sandy on the East Coast, we looked up recipes I could make from scratch.  But, with the realization “we don’t have any butter in the house,” our search quickly turned to a quest for another sort of chocolate-y baked good.  I remembered there were some dairy-free cookies I’d pinned in the past month, and after showing Scott the picture of these bad boys, he was all in.  To be honest, I hadn’t looked past the picture myself and was surprised to find not only did we readily have all the ingredients in the house, but the recipe is completely dairy and gluten-free (double score for me).  They were super easy to make and turned out almost like a meringue, with almond-butter and chocolate chips.  Like the original recipe description states, “it’s hard to eat just one.”

Using a small spoon, take the dough and make cookies to about the size of a walnut. (If using an ice cream scoop, 1 scoop equals 2 cookies.) Place on sheet an inch apart. Bake for 10-12 minutes until golden brown on top. Let cool for 5 minutes. Note – They might be soft when taken out of the oven but will firm upon cooling. 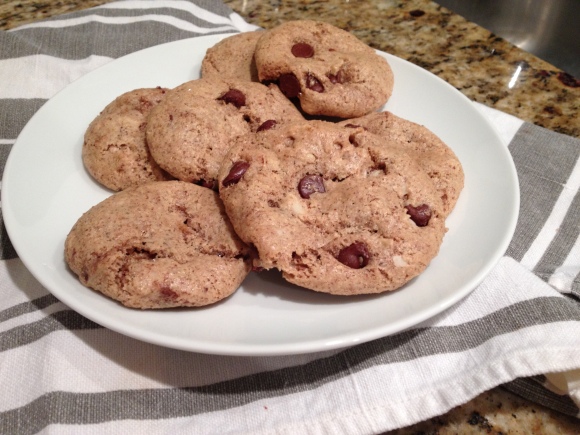